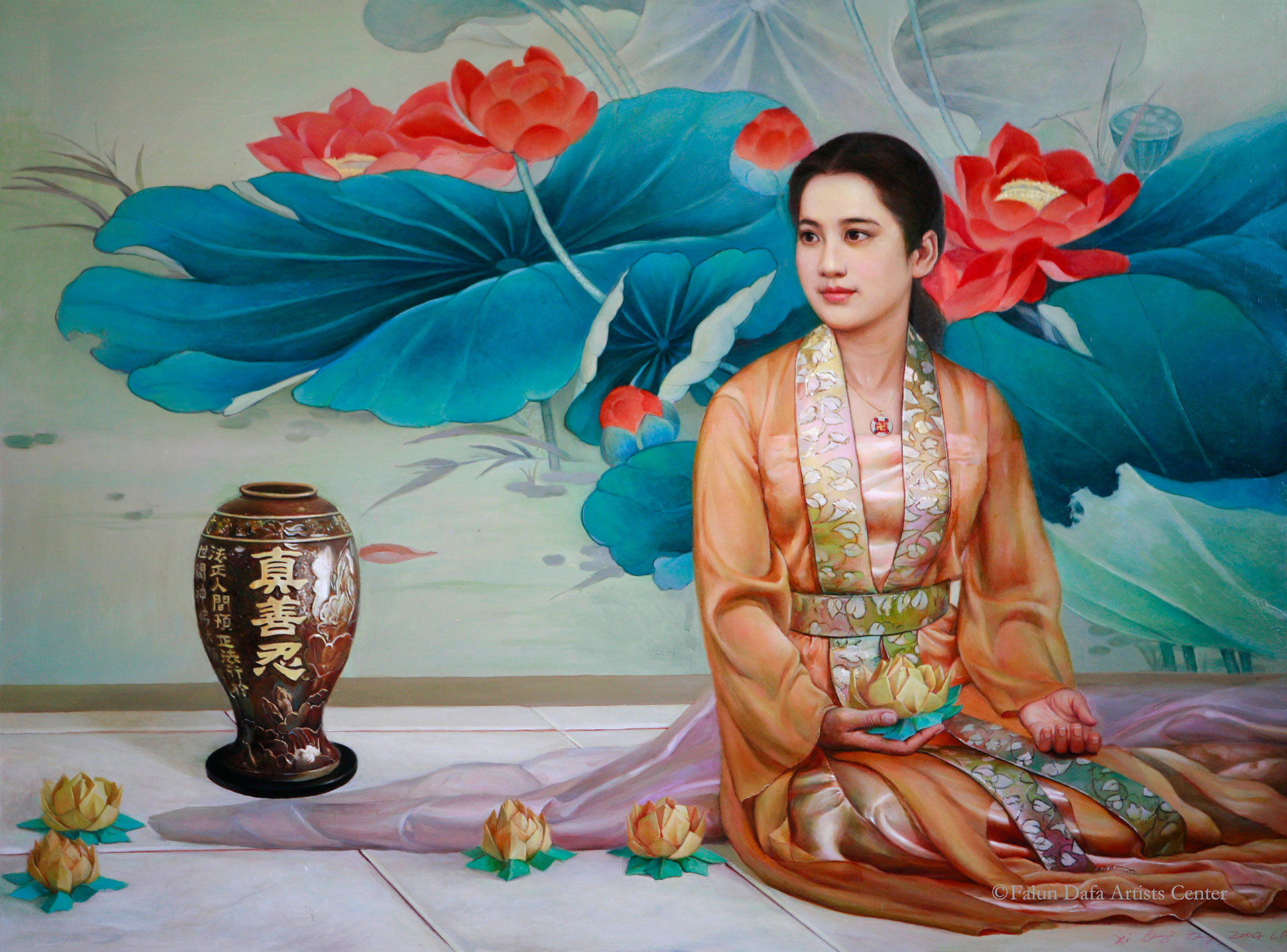 The Zhen Shan Ren International Art Exhibition is built on a several themes. One of them cultivation, the ancient idea that a person can improve themselves by seeking inside themselves and refining their character. Falun Dafa is a traditional Chinese cultivation way that teaches its practitioners to cultivate truthfulness, compassion, and tolerance.

When the artist Xiaoping Chen was living on Saipan Island, she enjoyed practicing Falun Gong by the sea. This painting depicts her practicing the fifth Falun Gong exercise, “Way of Strengthening Divine Powers.”

The clear water and blue sky reflect her tranquility and being united with heaven while in meditation. The four “cultivated infants” (celestial beings) play amidst an energy field.

Another theme is the persecution of Falun Gong in China today. After the practice grew to immense popularity in the 1990s, then Chinese leader Jiang Zemin started a brutal persecution of the practice. It was expected to last just a few days before the practice effectively disappeared in China. Instead, practitioners there continue to persist to this day, facing immense hardship as a result

This oil painting was inspired by Liu Chengjun, a Falun Gong practitioner from northern China. Liu died of torture 21 months into a prison sentence that was to last 19 years.

In this painting, Liu looks to the heavens, about to leave behind the ghostly shapes of the detention centre where he is held. The warm golden light represents the faith he kept true until his last moments.

A third theme of the exhibition is peaceful resistance. Falun Gong practitioners both inside and outside of China have continued to practice their belief, despite the threat of imprisonment, torture, and death. They have done this by exposing the crimes of the communist regime, using the facts of their experience to reveal the character of the Chinese Communist Party. Inside China, practitioners use a variety of methods from distributing flyers to stamping slogans on money. Outside of China, they have used whatever talents they have to reveal what is happening, including creating these paintings.

The woman’s gaze manifests outwardly an inner calm that has survived the day’s events. Her costume—a traditional Chinese garment most likely made specially for the occasion—and the paper lotus flower cupped in her hand suggest that she has partaken in one of Falun Gong’s many parades. Such parades seek to share with spectators both the beauty and grace that manifest through the practice, as well as the nobility and richness of China’s cultural heritage.

In recent years many Chinese followers of Falun Gong have returned to their cultural roots, reaching back to a time predating Communist rule and its devastation of China’s cultural landscape. Many see in their costumes and performances the seeds of cultural renewal—a renewal that is paralleled by that in their own spiritual and personal lives. The vase at left displays prominently the three Chinese characters “truth,” “compassion,” and “patience.” These are the virtues that inform such renewal and anchor the teachings of Falun Gong.